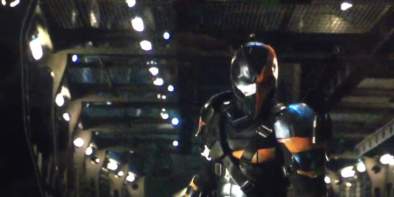 OMG ! ! ! OMG! ! ! OMG ! ! ! Do I seem excited enough yet?? Well just as much as I, you should be as well. This should bring levels of ORGASMIC joy to fan boy and girls everywhere. DCEU Batman, Ben Affleck tweeted out yesterday a somewhat cryptic video of the prominent DC Comics character Deathstroke. Now according to SEVERAL news sources it is being officially reported that DEATHSTROKE will indeed be the main villain in the solo Batman film directed by and starring Affleck and ALSO will appear in Zack Snyder’s “Justice League” film in 2017 (cue schoolgirl like screaming)

Now, while I am for sure not a fan of Zack Snyder directing these films, ESPECIALLY after Batman V Superman. I am sitting wit praying hands, fingers crossed and Santa Maria Candles burning that he does Slade Wilson JUSTICE (no pun intended) in the Justice League film and that Affleck can carry it on headed into the solo project.