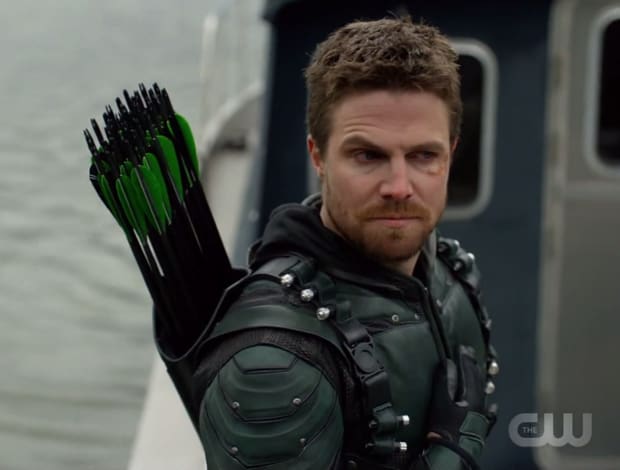 The 5th season of ARROW took 4th s in an emotional roller coaster  ending with the entire cast, except for Oliver and William, trapped in the Lian Yu explosion, there are a lot of questions about Arrow’s sixth season.

Now that William knows his friend Oliver is also the Green Arrow and his father, how will their relationship develop?

“Season 6’s theme is family,” said Mericle. “The last thing we saw was Oliver reunited with his son under pretty tragic circumstances. For us, going forward, thinking about ‘what is the challenge we haven’t seen a superhero go through on any of these shows’ is them being a parent. I can’t tell you exactly how that’s going to shake out but I can tell you he’s going to learn about being a father.”

The series will examine Oliver’s balance of being Green Arrow and a father.

“We’ve spent a lot of time in the writer’s room talking about Oliver’s relationship with William and the potential pitfalls that surround that,” said Guggenheim. “It was scary to us, because you’ve got a character who’s all about running around punching and killing people. What’s he going to be like as a dad? The way we chose to address this creative challenge was to really tell the story of Oliver and not shy away from the fact that Oliver does have this dual identity. We’re not moving away from it, we’re actually heading towards it.”

One of the hallmarks of the show since day one has been the flashbacks to tell Oliver’s story.

“We’re not going to be doing the Oliver-centric flashbacks anymore,” said Mericle. “So we have the opportunity to do it from different points of view. Black Siren would definitely be one we want to do on the show.”

In the Arrowverse no character is ever really dead or gone for good. That means producers are open to seeing John Barrowman’s Malcolm Merlyn or Jessica De Gouw’s Huntress again.

“We told John when we called him to tell him about the events of the finale, every single person on all the shows has come back in some shape or form,” said Guggenheim. “We’ve got flashbacks, we’ve got time travel, we’ve got parallel universes. Goodbye is never goodbye. He has an open invitation to return to the show any time he wants.”

“Jessica De Gouw has expressed an absolute willingness to come back. Jessica’s a favorite actor of mine, and the Huntress is a favorite character of mine,” he said. “I want to make it happen in Season 6. We’ve got some plans for the later half of the year that I think she will fit into really well, so we’ll see.”

Already confirmed to return is Manu Bennett as Slade Wilson/Deathstroke. He and Oliver came to a tenuous understanding in the season five finale.

“Whether he’s in present day or flashbacks I will leave to your imagination. I will definitely tell you that we really enjoyed having him back at the end of Season 5,” said Mericle. “He brings a chemistry and excitement to the set, and the fans love it. We’re excited about having him back.”