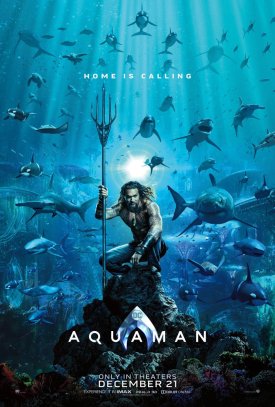 The wait is finally over.  During the Warner Bros panel at Hall H during San Diego Comic Con we were treated to the first trailer from the James Wan directed, AQUAMAN.

We witness the origin of Arthur Curry (Jason Momoa) in how his father Thomas Curry (Temuera Morrison) a lighthouse keeper met Queen Atlanna (Nicole Kidman) and the moment his special abilities became active.

Aquaman is initially running from his destiny as he talks to Queen Mera (Amber Heard) as she informs him of his brother, King Orm’s (Patrick Wilson) plan to wage war on the surface world.

The beauty of life underwater is incredibly captured in this trailer as director James Wan holds up to his promise of “fixing the way the Atlanteans speak under water”. Give this trailer a look for yourself and be prepared to be blown away