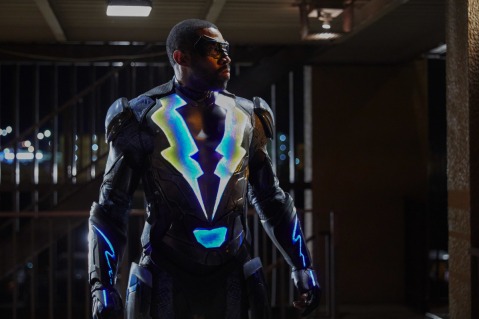 We are getting a hefty dose of new heroes for the new year and along with that more information about their arrivals (first episodes).  The CW has given us the breakdown for the inaugural episode of their newest hero Black Lightning which airs January 16, and with it they have also revealed a new title for the series opener – “The Resurrection!”

SERIES PREMIERE — Jefferson Pierce (Cress Williams) is a man wrestling with a secret. As the father of Anissa (Nafessa Williams) and Jennifer (China Ann McClain), and principal of a charter high school that also serves as a safe-haven for young people in a neighborhood overrun by gang violence, he is a hero in his community. Nine years ago, Pierce was a hero of a different sort. Gifted with the superhuman power to harness and control electricity, he used those powers to keep his hometown streets safe as the masked vigilante Black Lightning, but he left the Superhero days behind. Almost a decade later, Pierce’s crime-fighting days are long behind him…or so he thought. Christine Adams, James Remar, Damon Gupton and Marvin Jones III also star. The episode was written and directed by Salim Akil (#101). Original airdate 1/16/2018. 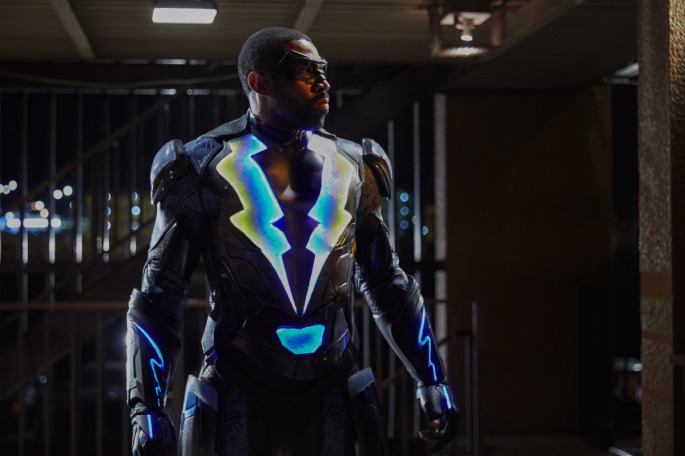 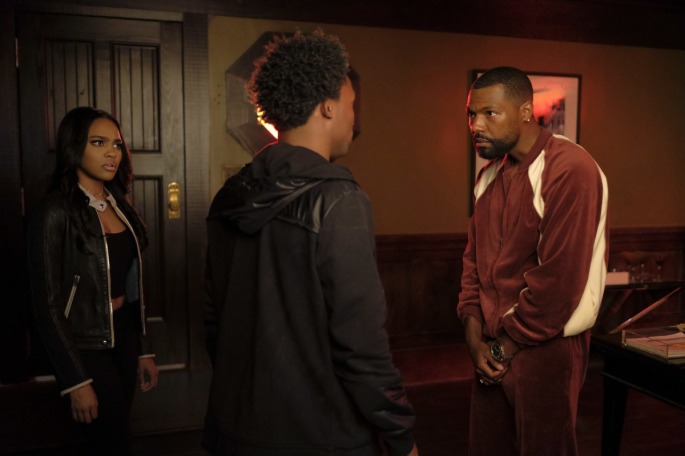 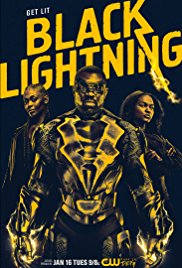 If you weren’t already excited for the newest hero to hit your tv screens, this new trailer for sure should be a reason why.

We’re talking about the new trailer for the CW’s Black Lightning that dropped today and it’s jam packed. Set to the backdrop of Kendrick Lamar’s “backyard freestyle” we get a look at Krondon as Tobias Whale as well as James Remar as Peter Gambi. The series stars Cress Williams as Jefferson Pierce a retired superhero turned high school principal who is brought back into the crimefighting.

Check out the trailer below and be sure to catch Black Lightning when it debuts on Tuesday, January 16th on The CW.

What went from just a pilot is now officially a full part of the Arrowverse.

The CW’s Black Lightning has been ordered to series, marking the fifth DC superhero show on the network and the sixth DC adaptation overall, including iZombie, which was just renewed for a fourth season.

Greg Berlanti’s latest DC Comics-based offering Black Lightning is reported to be picked up from a pilot order, making its mid-season debut at the beginning of next year. The network also carries Arrow, the Flash, Legends of Tomorrow, and Supergirl, as well as the Archie Comics adaptation Riverdale.

Reports started to come out earlier this week that Black Lightning was all-but-assured a midseason debut and a 13-episode pickup. Those particulars haven’t yet been confirmed, but seem likely.

The CW airs each of those shows and has since made a name for itself as a popular network for younger demographics.

The show as initially put into the works for Fox, who passed on the project before the CW picked it up — the same process undergone by Riverdale.

Berlanti oversees all of the DC superhero shows as well as Riverdale, and his pilot Searchers may be picked up by The CW this year as well. He isn’t involved in iZombie, which was developed by Veronica Mars executives Rob Thomas, Diane Ruggiero-Wright, and Dan Etheridge.

“I knew way too much about the world as a young boy growing up in Richmond, California. I was no stranger to violence, death, hopelessness or the feeling that no one cared about what was happening in my life,” said executive producer and writer Salim Akil, who will direct the pilot. “Comics were a great way for me to escape. I was about 13 when Black Lightning was created, and finally there was a Black Super Hero that gave a damn about our neighborhood and our lives. Resurrecting him at a time in our society when a sense of hope is lacking…Black Lightning will be that hope. And in updating the suit, it will signal to a new generation that it’s time to harness and release our power, and become our own Super Heroes.”

The first African-American DC Super Hero to have his own stand-alone comic title, Black Lightning is based on the character created by Tony Isabella with Trevor Von Eeden in 1977. Jefferson Pierce made his choice: he hung up the suit and his secret identity years ago, but with one daughter hell-bent on justice and the other a star student being recruited by a local gang, he’ll be pulled back into the fight as the wanted vigilante and DC legend — Black Lightning.

Greg Berlanti, Salim Akil, Mara Brock Akil and Sarah Schechter are executive producers of Black Lightning, from Berlanti Productions and Akil Productions in association with Warner Bros. Television. Salim Akil is directing the pilot from a script he wrote.

Jefferson Pierce made his choice: he hung up the suit and his secret identity years ago, but with a daughter hell-bent on justice and a star student being recruited by a local gang, he’ll be pulled back into the fight as the wanted vigilante and DC legend — Black Lightning.

More like here is the first look of the upgraded Black Lightning.  Many people have been wondering what Cress Williams will look like after he dons the mask of the latest DC Comics hero to join the CW and it’s not bad at all.

If you’re unfamiliar, Black Lightning, aka Jefferson Pierce, was the first Black superhero to headline his own book at DC, after one of In the single worst ideas DC ever tossed around the bullpen was thankfully filed away. A gold medal Olympian and educator, he returned to Metropolis’ South Side (better known as Suicide Slum) with his family to run the local high school, and quickly discovers a need to beat up crooks at night. On the show, Lightning (played by Cress Williams) retired years ago, in part because he did more good during school hours than spending his nights punching gangsters, only to find his daughter is following in his footsteps. And if that weren’t enough, one of his students is being forcibly recruited by a gang, so out comes the power armor.

In theory, Pierce won’t be hanging out with Barry, Ollie, and the gang, but considering how often Kara pops in to say hi, we don’t expect that to last. Hopefully not her cousin though.  We’ll find out once the pilot is shot and the CW decides to take it to series. Well it looks as if the CW’S superhero universe is about to get a little bit bigger.

“Black Lightning” has nabbed an official pilot order at the CW, Variety has learned.

The Greg Berlanti-produced series was originally was developed at Fox earlier this season, landing a hefty pilot production commitment from the get-go. Insiders tell Variety the network passed on the project earlier this week, so then it moved to the CW.

Should “Black Lightning” go to series, it would mark the fifth DC superhero show from Berlanti at the CW, which is currently home to “Arrow,” “The Flash,” DC’s Legends of Tomorrow” and Supergirl,” which have all been renewed for the 2017-2018 season.

If “Black Lightning” is greenlit for 2017-2018, sources close to the network explain that the shows would be staggered throughout the year, rather than scheduling five separate nights of superhero programming.

“Black Lightning” is the second Berlanti Productions series to move from another network to the CW. After “Supergirl’s” first season struggled to keep a big enough audience for CBS’ standards, the younger-skewing sister network picked it up for its sophomore season. While superhero programming may not be the best fit for the Big Four, the CW has had great success with its four series, including “Supergirl,” which is performing strongly in its second season at the CW, only behind the net’s top show, “The Flash.”

Back at the Television Critics Association press tour last summer, CW chief Mark Pedowitz was asked about the possibility of another superhero show. He said: “At the moment, we were only expecting to have four this season…At this time there’s no real discussions about any other superhero characters, but one of the things about the Arrowverse…we get to see all these characters. Now, if someone pops, then you reexamine the situation, but at this time, there are no discussions with anybody else.”

Based on the DC character, “Black Lightning” is about Jefferson Pierce. He made his choice: he hung up the suit and his secret identity years ago, but with a daughter hell-bent on justice and a star student being recruited by a local gang, he’ll be pulled back into the fight as the wanted vigilante and DC legend, Black Lightning.

The original comic character was created by Tony Isabella with Trevor Von Eeden. The TV pilot was written by Salim Akil and Mara Brock Akil, who will serve as executive producers with Berlanti and producing partner Sarah Schechter. Berlanti Prods. and Akil Prods. are producing with Warner Bros. Television

It seems as if the king of the DC televsion universe, Greg Berlanti is back at once again. This time he is linking up with creator of The Game and Being Mary Jane, Mara Brock Akil and her husband Salim Akil to bring another DC Comics character to life and to the television screen in Black Lightning.

The story is written by the Akils where Black Lightning centers on Jefferson Pierce who made the choice to hang up his superhero suit and secret identity many years ago. But that changes when his daughter becomes hell-bent on justice and a star student gets actively recruited by a local gang, Pierce plunges back into the fold as the wanted vigilante and legend Black Lightning.

The project is currently being shopped around to various networks. How potentially amazing would it be to see a Berlanti DC television property become a NETFLIX exclusive?