James Gunn’s THE SUICIDE SQUAD has yet to hit theaters but the buzz behind it and its stars are so big that spin-off TV series are already being ordered. This announcement is huge as it puts John Cena’s THE PEACEMAKER front and center with his own series coming to the HBO Max streaming service.

THE PEACEMAKER has been giving an eight-episode straight-to-series order for its first season with THE SUICIDE SQUAD director writing all episodes and directing a number of them. The show is said to explore the origins of the DC Comics character played by Cena.

Peacemaker is scheduled to begin production in early 2021, prior to Gunn beginning work on the next GUARDIANS OF THE GALAXY film. The show will be produced by James Gunn and Peter Safran with Cena serving as co-executive producer.

This is not the first spin-off series from an upcoming DC film set to hit HBO Max. It was recently announced that a GOTHAM PD series would be coming as a spin off of THE BATMAN from director Matt Reeves. Also former DC Universe originals such as DOOM PATROL, HARLEY QUINN, TITANS and YOUNG JUSTICE have moved to the streaming platform.

To give a bit of back story on the character of The Peacemaker, he was created by Joe Gill and Pat Boyette and first appeared in the Fightin’ 5 series originally owned by Charlton Comics, is a man who believes in peace at any cost — no matter how many people he has to kill to get it. The first incarnation of Peacemaker is Christopher Smith, a pacifist diplomat and son of a Nazi death camp commandant who founded the Pax Institute who fights dictators and warlords.

It seemed like nonstop we were either hearing new additions or rumors of addition to Warner Bros THE SUICIDE SQUAD written and directed by James Gunn. Well Gunn himself has offically revealed the cast of the upcoming sequel on Twitter.

This also officially confirms Michael Rooker, Pete Davidson and Taika Waititi as members of the film.

THE SUICIDE SQUAD is set to hit theaters on August 6, 2021 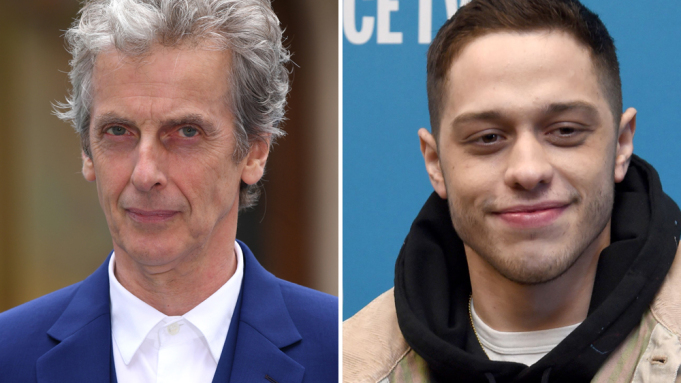 When you hear that a project like THE SUICIDE SQUAD is constantly grabbing high level talent and with a director such as James Gunn at the helm you cant help but to continually have your anticipation build. This is another one of those times.

DEADLINE is reporting that DOCTOR WHO actor Peter Capaldi, who also is an Academy Award winner (1995) is joining THE SUICIDE SQUAD. But the announcements do not stop there. It is also being reported that SATURDAY NIGHT LIVE‘s Pete Davidson has been in talks for a small cameo in the pic, and there’s a chance he’ll do it between breaks on the shot. That deal is still coming together.

No details were given in regards to which roles Capaldi or Davidson will play. What do you think of this news and who would you like to see these characters portray on the big screen?

The man who re-invigorated the THOR film series thanks to THOR RAGNAROK and is getting ready to jump back into it with THOR: LOVE AND THUNDER ,and already has a jam packed Fall lined up is potentially making his way onto the superhero franchise aisle. DEADLINE is reporting that actor, director and writer, Taika Waitii is currently in talks to join James Gunn’s THE SUICIDE SQUAD for Warner Bros and DC.

Waititi is currently promoting his Fox Searchlight comedy JOJO RABBIT (opening Oct. 18) and beginning work on NEXT GOAL WINS, his next directorial for the studio classic label. There are no reports on what his role will be or even how big it will be.

I think it’s pretty safe to say James Gunn’s THE SUICIDE SQUAD is locked and loaded with talent on all fronts and this latest casting announcement just adds to it.

DEADLINE just broke the news that Comedian Steve Agee is the latest addition to the “worst heroes ever” sequel.  Agee will provide the voiceover to super-villain King Shark, who most recently was seen on The CW’s THE FLASH.

Agee already has a working relationship with Gunn as he was in GUARDIANS OF THE GALAXY VOL. 2 as Gef, a member of the Ravagers. This is also not the first time Agee will be utilizing his voice talents. He can also be heard on Cartoon Network’s ADVENTURE TIME and Netflix’s TWELVE FOREVER.

The Suicide Squad that is. Storm Reid from A WRINKLE IN TIME has signed on to join James Gunn’s THE SUICIDE SQUAD. Now it is being reported that Reid is set to play Idris Elba’s daughter in the film. Elba, who was recently revealed to be portraying Brock Turner aka Bronze Tiger in the film will be part of the group of anti-heroes based on DC Comics characters.

The BLACK ADAM film is getting more traction as Variety is reporting that JUNGLE CRUISE director Jaume Collet-Serra is in negotiations to direct Johnson’s first romp into the superhero world.

BLACK ADAM became a priority after the success of SHAZAM! New Line Cinema originally wanted to introduce the character in the first SHAZAM! movie but the producing team quickly made the conscious effort to separate the two characters with a “Black Adam” solo pic. There is also rumor of Black Adam being involved in THE SUICIDE SQUAD.